“This year we have the special privilege of recognizing and honoring our native son O.C. Horton, Jr., who served on the USS Arkansas CNG-41 [in 1978]. That is very unique,” Irby said in a news release, adding that Horton grew up at Wabbaseka.

KABZ 103.7 The BUZZ co-hosted a live radio broadcast beginning at 6 a.m. in the Wabbaseka Community Park at U.S. 79 and Myrtle Street in Wabbaseka, Arkansas.

On October 12, 2013, Irby and the committee revealed the plaza by conducting a showcase and dedication ceremony at the park.

The ceremony began at Hot Springs, where the flag was first revealed during the 1913 Arkansas State Fair, journeyed to Little Rock where it was welcomed by state fair officials and patrons, and continued to Pine Bluff, the county seat of Jefferson County and former home to Hocker.

The convoy arrived at its destination at Wabbaseka where the inaugural celebration of the Arkansas Flag/Wabbaseka Memorial Plaza was held.  At each stop, a flag was given, ranging from the U.S.A. flag to various Arkansas flags representing the transitions throughout the years.

The third anniversary recognized Horton, who graduated from high school in 1970 and attended Arkansas AM&N College (currently the University of Arkansas at Pine Bluff).  On March 11, 1976, he enlisted in the Navy.

Horton retired in April 2006 with the rank of Chief Warrant Officer-4 (CWO-4).

“It is with great honor that the Arkansas Flag/Wabbaseka Memorial Committee recognize and esteem O.C. Horton, Jr. for his distinguished service to the country and unique role in representing the state of Arkansas and Wabbaseka, his home hometown and birthplace of the Arkansas State Flag,” Irby said. 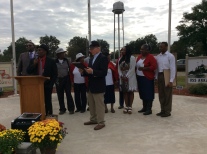 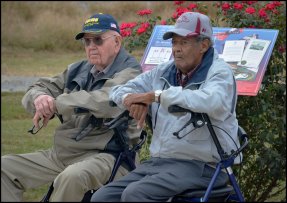 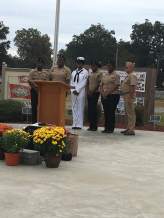 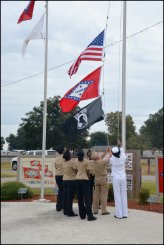